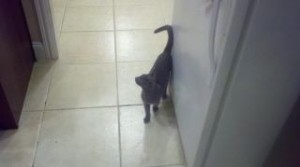 Meet Guinness. He is formerly of the Itteh Bitteh Kitteh Committeh. He is now a private in the First Feline Battalion. He has already survived harsh elements and food deprivation. Great things are expected of him.

There were rumors of my cousin’s demise, but Fred (a.k.a.”Verrazano”) is alive and well. He was doing surveillance for the next special mission. He was almost caught by the enemy, but his stealthy ways were why we chose this young chap for our surveillance team. The tiny kitteh has hopefully learned his lesson in Chinatown.

Manchas, a Chihuahua, took on two pit bulls and saved the life of a 4-year-old boy. Sadly, Manchas was killed by the pit bulls.

May that hero pooch enjoy an eternity of bacon treats, fire hydrants, and mailmen.

Tariq “Litto” Mashi Ghauri, a Pakistani Christian who refused to convert to Islam, was raped and murdered.

Lt. Gen. Harry Kinnard–at the time a Lieutenant Colonel–was fighting for survival in the Battle of the Bulge. Two German pieces of crapofficers offered him a chance to surrender, or see his troops face destruction.

Kinnard handed the Germans the mother of all responses: “Nuts!”

This was his Christmas message:

What’s merry about all this, you ask? Just this: We have stopped cold everything that has been thrown at us from the North, East, South and West. We have identifications from four German Panzer divisions and one German parachute division. The Germans surround us, their radios blare our doom. Their commander demanded our surrender, and received the following reply… ‘NUTS!’ We are giving our country and our loved ones at home a worthy Christmas present, and, being privileged to take part in this gallant feat of arms, are truly making for ourselves a Merry Christmas.

The good General was 93.

After reading this, all I can say is, “Woof!”

This dog deserves a lifetime supply of tummy-rubs, dog biscuits, and steak dinners.

Col. John Ripley (USMC), whose troops in Vietnam were ordered to “hold and die”, singlehandedly blew up a bridge, setting the charges while hanging from the structure as the enemy took shots at his body. He was awarded a Navy Cross for the action. This year, he became the first Marine inducted into the Army Ranger Hall of Fame.

Like Thomas Smith, I support ugrading that to a Medal of Honor.

I hereby induct Gracie into the Order of Recon.

This is proof that the people awarding Nobel Peace Prizes are a lot of [bleep]tards: they’ll give one to Yassir Arafat–a terrorist–but not give one to Irena Sendler, who risked the backlash of Hitler’s thugs by saving over 2,500 Jews from the Warsaw Ghetto.